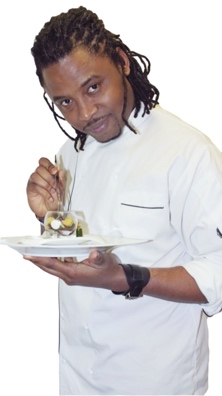 Barbadian born Chef Jason Howard now based in London specialises in Modern Caribbean Cuisine. He is trained in classic and modern French cuisine with two star Michelin experience as a Sous Chef from his time at the Helene Darroze restaurant at the prestigious Connaught Hotel, Mayfair in London.

He specialises in fusing caribbean ingredients with five star fine dining excellence. His innovative work has won praise and respect from the industry as well as landing a speaking engagement as international guest chef at the Jamaica Observer Food Awards and The Art Of Good Food, sponsored by the Jamaica Broilers Association in May of last year.

In addition, his Instagram account has amassed over 100,000 followers online at the time, attracting an international audience as well getting him featured across television, radio and newspapers in the UK. Culminating
in appearing on BBC Masterchef: The Professionals last year, a flagship reality tv food show that attracts and audience of 3 million viewers (excluding cable, satellite, online and repeat transmissions).

Finishing as a quarter-finalist on the show, the judges were impressed with the execution of his dish, for it’s flavour, balance, texture and presentation.

Chef Howard will be flying the Bajan flag as part of Barbados 50th anniversary various related events in the UK. Aside from this he has set up the Culinary Caribbean Collective a showcase of talent from the Caribbean promoting the best in food and professional endeavour.