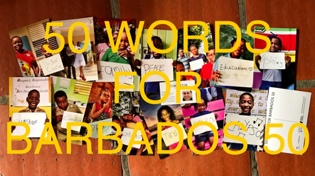 50 words for Barbados 50′ is a major photographic series featuring images of Bajan children and families each holding a single word they chose to represent Barbados to the world in its 50th year of independence.

The concept for the series was developed by Portland Education’s Director of Outreach, Alex Bell.

Images from the series have been selected for exhibition at the Barbados Museum’s ‘Barbados at 50’ as giant black and white posters developed by Portland Education in conjunction with global social enterprise ‘The Inside Out Project’ (IOP). This exhibition opens on November 25th.

These images will also feature in IOP’s major book to be published globally in 2017.

Other images from ’50 words’ will be projected throughout Barbados’ iconic Kensington Oval as part of the NCF Gala ‘Through the eyes of a child’ on November 20th featuring thousands of young performers.

On November 22nd a formal reception will be held at the British High Commission’s official residence in Barbados where a selection of images from the series will be exhibited along with the symbol of independence, the broken trident, and in the presence of the Minister for External Affairs and Portland Education’s Alex Bell to celebrate the close ties between Barbados and the UK over the last 50 years.

Portland Education is actively seeking partnerships to use these images to raise money for children and families facing challenging circumstances in Barbados through the sale of calendars and postcards.

Portland Education was founded by Alex Bell FRSA, an international educator, innovator and public speaker. Alex is a Fellow of the Royal Society of Arts, Ambassador for the British Council and collaborator on the record-breaking ‘Hello London, Hello Barbados’ festival in the UK held in August 2016, featuring 15 NIFCA award-winning artists showcasing Bajan heritage and talent in front of an audience taken from several thousand visitors to the Museum in London for the event.